Why Is Intrigue Bottle Service So Expensive at Intrigue Nightclub?

Are you considering booking Intrigue bottle service? A list of the top clubs in the Las Vegas is not complete if Intrigue Nightclub isn’t included. Located at the Wynn Hotel, this fabulous new nightclub was designed by Roger Thomas and the Wynn Design and Development Group. It sits on 14,000 square foot and can hold up to 1,200 people, and enforces a social media free policy. 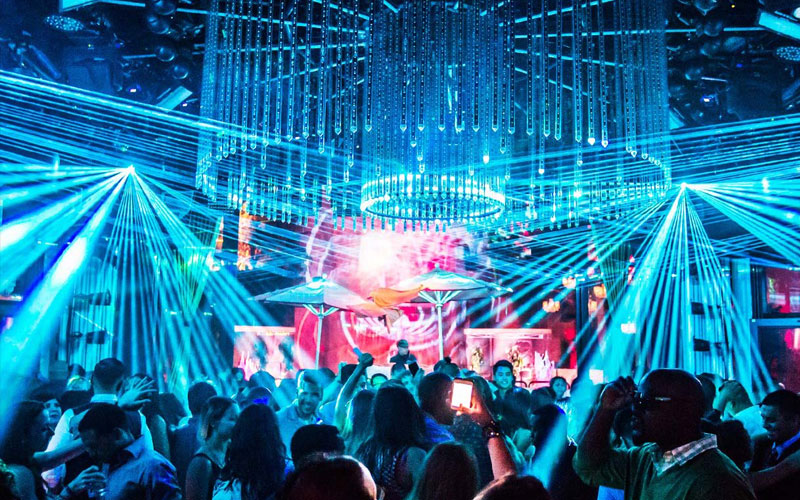 Aside from that, the Intrigue Nightclub also has another mini nightclub inside it that can hold up to 150 people. However, that club is exclusive with 85 seats reserved for VIP patrons. It might have just been around for 2 years, but this club has already established itself as one of the best around. Let us have a look at some of the reasons why Intrigue bottle service costs so much money. 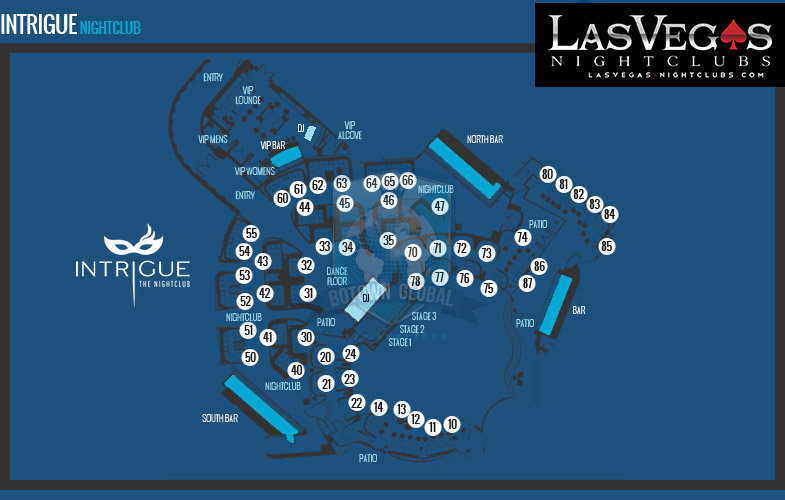 A room’s design can either lift your spirits or dampen them; the Intrigue Nightclub’s design will leave you in awe and instill a desire to return, soon. The first thing that catches your eye when you enter this is the even layout of the club. However, that is not even the highlight of the clubs design. Its outdoor patio has a 94-foot waterfall that is connected to a mountain. The mountain throws flaming fire and occasionally projects visuals and is also linked to an active fountain resting on a 54-degree pond. Inside the club, there are 68 table locations for Intrigue bottle service with table minimums that range from $1,200 to $10,000. Intrigue Nightclub does not disappoint regarding design and backs it up with new-age technology to match the current times. 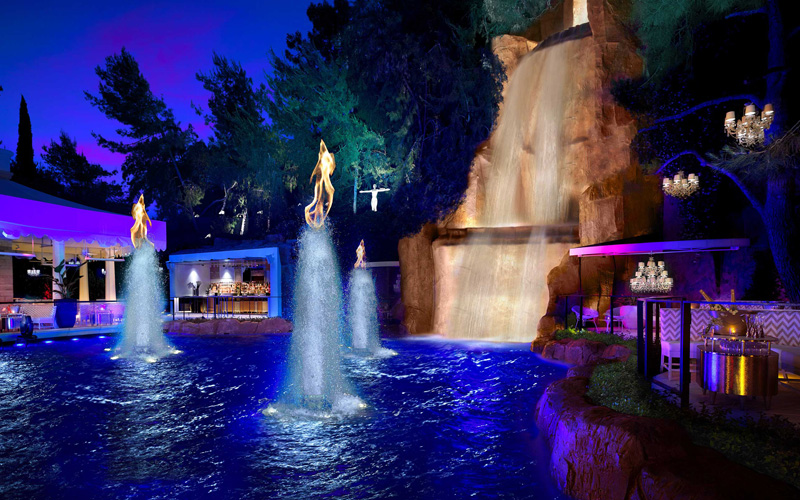 Intrigue Nightclub Las Vegas has an average entry fee of $60. This figure often fluctuates depending on the time of the year, week, or if there is a big-name guest DJ appearance. You do not have to wait in line for long before entering the club as long as you are on the guest list or have booked Intrigue bottle service. Purchasing presale tickets will get you in the club fast than waiting in the general admission line. However, arriving early on certain days can save you a lot of trouble.

Also, it goes without saying that standing in the Intrigue bottle service line will get in quicker and receive fast service. The reason for this is because those who order bottle service can make reservations before their visit to the club and have everything they need prepared beforehand.

As expected, the price of drinks is due to rise when a club like the Intrigue Nightclub Las Vegas evolves comparing to the former Tryst Nightclub. Nonetheless, the service and ambiance in which you get to enjoy your drink make it all worth it. A bottle of Ace of Spades champagne goes for around $300 at retail price; the Intrigue Nightclub sells the same bottle at $1,700.

Nothing says celebration more than a cold bottle of Louis Roederer Cristal Rosé Magnum. Its retail price is $320, but you can enjoy it in the VIP booth or anywhere inside the club at $6,000. If you are a liquor fan, enjoy a bottle of Hypnotiq at $550 as opposed to its retail $50 price. With Intrigue bottle service, you can have any of these drinks waiting for you the moment you hit the club.

A bottle of Avión Reserva 44 tequila can provide you with the perfect way to charm the special person you came with by the beautiful waterfall. Generally, it goes for $150 but is available at the Intrigue for $1,295. The drinks menu also constitutes of other forms of drinks from bourbon to whiskey, scotch, gin, rum, vodka, and cognac. 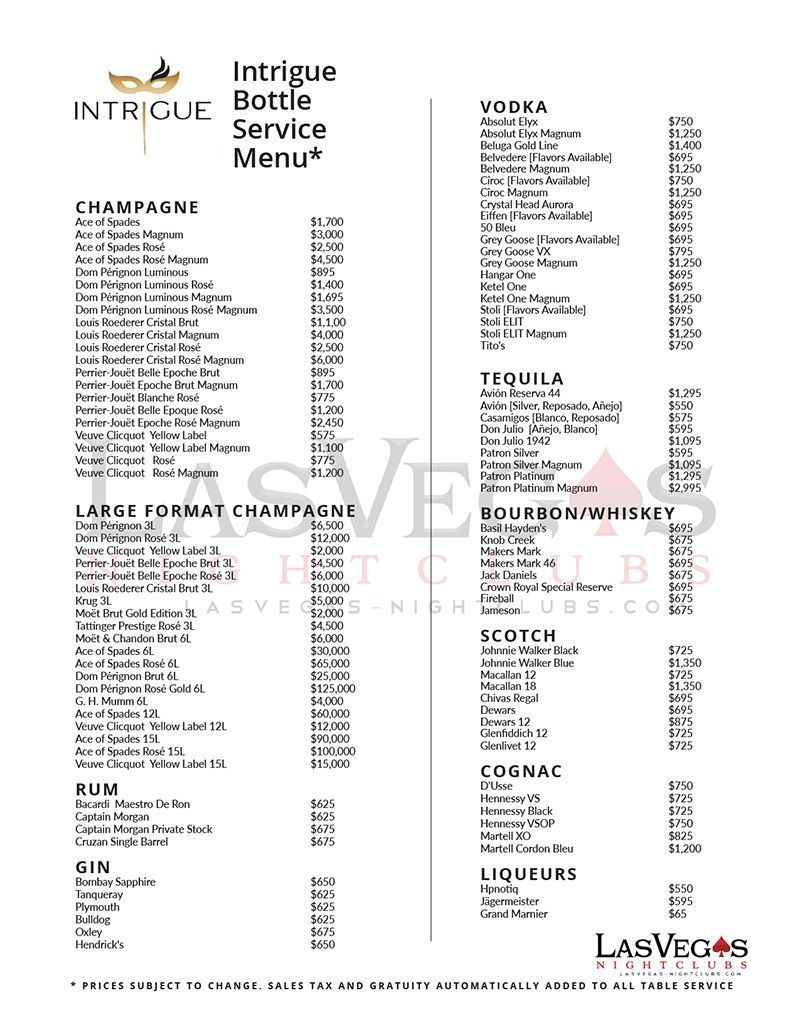 Table locations for Intrigue bottle service in different parts of this club demand different prices. This price is due to change depending on the performing act, the day of the week or time of the year. Also, each table holds a different number of people, the more there are, the higher the price. Small floor tables will cost you roughly $1,200 to $2,500 while small patio tables range from $1,200 to $2,500. 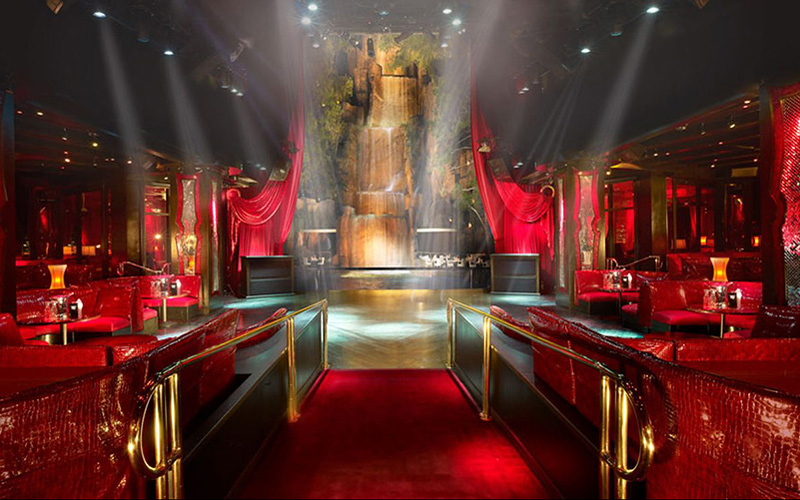 Intrigue Nightclub Las Vegas wouldn’t be ranked as one of the best clubs in Las Vegas if the club delivered less value than all the other clubs. The club plays EDM, top 40 music, Hip Hop, EDM, and other musical genres. Resident DJs include names like Eric Dlux, Politik, Marshmello, and Konflikt just to mention a few, but the club does not focus as much attention on the DJs to get the crowd there for to book Intrigue bottle service. Instead the venue spends money on theme ideas to make the club appear better with every new visit so each time you book Intrigue bottle service.

Nobody likes a dimly lit or extra bright club; finding the perfect amount of light has made most clubs close shop early. The lighting features designs by John Lyons Systems as well as Boyd Lighting’s Ormolu two Sconces. They used white as the background color at the club while laser technology and projection cater for the lighting system. 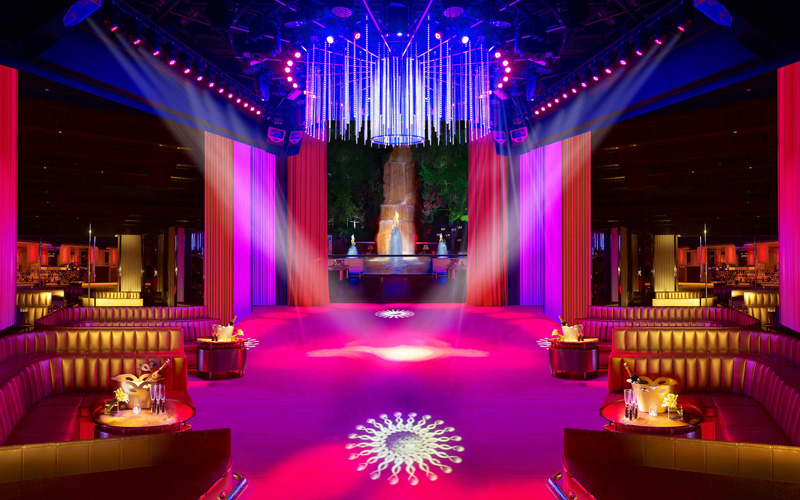 With 32 projectors in the entire club, you will not miss a single thing even when far from the main stage. In addition to videos, these projectors also relay images, patterns, and multiple colors. The sound system for the Intrigue was also designed by the John Lyons Systems and averages at 80 decibels when on the outdoor patio and 110 decibels when inside the club.

Entertainers are charging more and more to grace an event or club, and bottle services have spiked exponentially in the past few years. However, you can expect the best when you book Intrigue bottle service without having to be overwhelmed by fans of certain DJs.